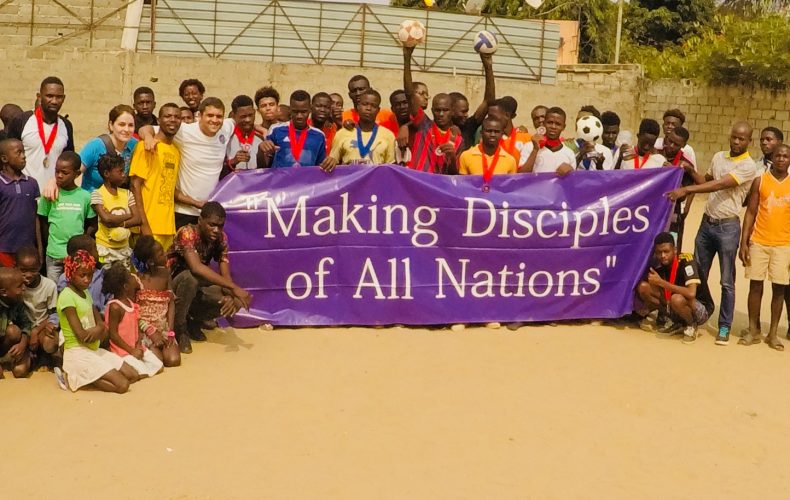 On August 12th during a worship service held at our congregation in Viana, in the vicinity of Luanda - Angola,  the congregation and I were astonished as we witnessed a healing miracle occur just right before our eyes. Bertila,  a young lady and member of Our Chancel Choir, was miraculous healed from a growth in her left breast. Unlike several United Methodist congregations, our congregation has broken several barriers of tradition and customs that characterize most Methodist congregations. We believe in the supernatural power of God and of the Holy Spirit, and thank God we have been experiencing so many wondrous and miracles of God; however, Bertila's healing miracle was just an amazing experience that we all marvelled at.  I did not know before that Bertila was undergoing such a situation that actually was making her so concerned and unrest. Today, as I interviewed Bertila, she told me that she was experiencing that situation, or at least she learned about the thing in her left breast since July, and she was so concerned that she was no longer in peace. Both Bertila and all of us in our congregation had the chance to witness that the God we adore, the God we serve, is a living God and He is a Mighty God whose power has no limitations, and so He performs miracles even in our days.  He is faithful to His Word, and to all those who believe in Him, nothing is impossible. - Rev. Mario Gerson Costa is the Senior Pastor at Rev. Gaspar de Almeida Methodist Church in Luanda, Angola.

Obedience and respect for authorities are virtues of the Angolan children. As for personal dreams and goals, I felt as if they hardly exist among them. It was at that moment that I really understood that to seek the interests of others inside God's will is at the heart and purpose of missions and for that purpose the Holy Spirit of God will always be willing and leading those of us who have a heart to serve. I do not know if I will ever see those children again, but I pray that each one of them will grow in wisdom and understanding from God, so that one day we may all meet again and sing in one voice in the celestial choir. - Missionary Rúbia Araujo is a licensed Chiropractor and Physical Therapist in João Pessoa, PB, Brazil. The Kingdom at Hand  - Pr. Anthony Pontes

During the days in the Angola Hope Tour 2018 project, the missionaries and I had the opportunity to study and delve more deeply into the biblical study of the Great Commission. On Tuesday of the project, our local pastor, Pr. Mario Gérson, called the church for a miracle service in the middle of a work week. Many asked their bosses to be excused, and dozens of people attended the meeting. We started the service at 10 am with no exact time to finish. People came early and crowded into the entrance. God became present in that place, and the signs that accompany those who believe in Jesus Christ was evident with many physical, emotional, and spiritual healings. Dozens of people surrendered to Jesus and dozens of people were delivered from demonic spirits; a great way to conclude the project that started in the heart of the Lord. - Pr. Anthony Pontes is the founding and Senior Pastor of Baptist Church Revival Time in João Pessoa, PB, Brazil.

A Reflection on the Manifestation of God's Power

As incredible as it may seem, the vast majority of people, and especially the religious industry, tend to see the Gospel practiced with manifestations of power, similar to what is seen in the book of Acts as the stranger of these two options.

How is this possible? - Well, fundamental denominationalism has created for the religious class a corporate structure where one can find ways of growing or scaling up authority based on socio-political skills and not necessarily called by God. This causes a religious comfort that is all that a man or woman in his condition of being human wants; comfort, structure, security, stability. Continue Reading