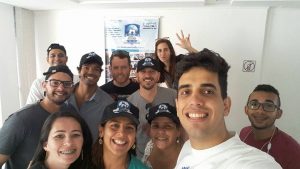 All Nations Soccer Ministries, the institution responsible for the Hope Tour projects around the world, from September 18 to 23, 2017, held the first edition of the Event in Brazil/PB. Thiago Gonçalves, president of the organization and Vice President Anthony Pontes, Pastor of the Baptist Time of Revival Church (IBTA) in João Pessoa-Paraíba, were at the forefront of the work. Missionaries were also present: Chris Dickerson (USA); Erick Stochero (Paraná); Paulo Henrique (Goiânia); Vilson Veiga (Goiás); Larissa Danielly (Goiânia); Morgana Pontes (Paraíba); Janaílda Antunes (Paraíba).

For the accomplishment of the actions with ANS MINISTRIES, the local Church began the work with a visit to an institution of care for the elderly; there the Missionaries fulfilled the mission with evangelism, prayers of healing and deliverance, as well as donation of geriatric kits. In the evening, in Praça da Paz-Bancários / João Pessoa, in partnership with the NGO -EFJB (School of Brazilian Youth Soccer) presided over by the Founder Professor, Manoel Carlos Brandão; this officiated the opening of the Event.

The next day, all the team involved continued the work in a service of healing and deliverance; in preparation for the great street evangelism, with the Project AvivAction of IBTA church, which brings food, a word of salvation to those on the margins of society; the AvivaAction is held weekly by the IBTA Church. With the arrival of the Missionaries, the city of Rio Tinto / Paraíba, whose population has its largest concentration of Potiguara Indians; there was founded an IBTA congregation built through the donation of land, by Cacique Claudecir Braz, commonly known as (Cal). The Missionaries team with members of the church headquarters, joined the members of that city giving continuity to the program.

During the week, evangelism was conducted throughout the area surrou 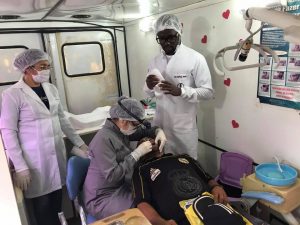 nding the local congregation; including public indigenous schools, streets and residences; fulfilling the IDEAL OF JESUS ​​found in the Gospel of (Mark 16:15) with a harvest of 50 souls who surrendered to the plan of Salvation during the great service of healing and deliverance that was held at night.  ANS SOCCER MINISTRIES held the first Youth Soccer tournament, at the Fernandão Gymnasium, Vila Regina Monte-mor, Rio Tinto. At last, there was a great mobilization of the local society, seeking assistance from the services available, such as Odontomóvel, Physiotherapy, Nursing, Hairdressing, Advocacy, Psychology, among others. The tour also consisted of the first children's event, with children of the congregation and guests and a crusade with PROPHETIC ACT on the city. For the closing of the Hope Tour Brasil / 2017 there were awards for youth athlete winners of the first ANS Cup; made by missionaries with the donation of uniforms and boots.

We acknowledge the total involvement of the IBTA Church, João Pessoa / PB headquarters; lead by Pastor Anthony Pontes and Morgana Pontes; and of the Congregation in Rio Tinto, lead by Pastor Rodrigo Simplício and Allane Simplício; all for the sole purpose of bringing the Gospel of Jesus Christ to the thirsty; both those directly involved and indirectly through intercession, maintenance and giving in agape love.  -- Written by Josy Pereira (Local newpaper Journalist- translated from Portuguese to English)