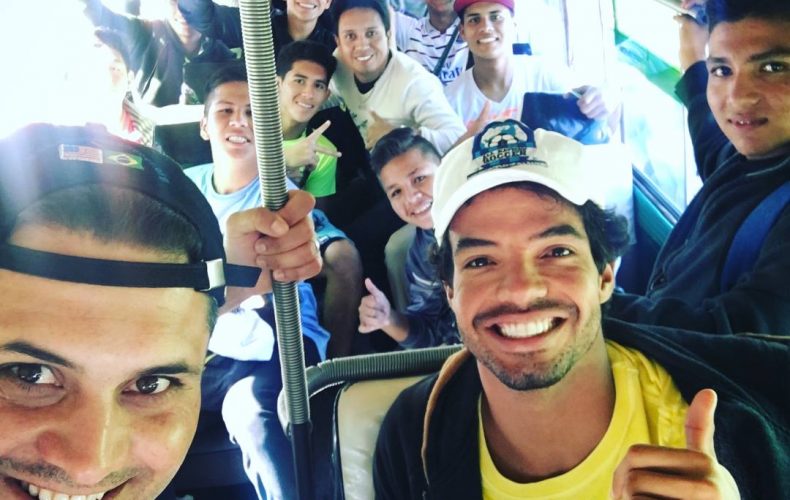 It was the 7th of June 2017. I said good-bye to my wife and three kids and headed out on another mission. This time it was to beautiful Santa Cruz de La Sierra, Bolivia. Paulo Mendes (ANS Ministries in Brazil Headquarters Representative) was coming from Brazil to meet me in Bolivia and together our mission was simple, connect with David Suarez. David reached out to ANS Ministries in Peru back in February. Our objectives in Bolivia were; meet David, learn about his work, life, heart and ministry. Together, Paulo and I were to evaluate if David and his vision matched with ANS Ministries vision to, “Make Disciples of All Nations,” and from there decide whether he was the right man for us to partner with in order to do the most good by reaching the youth, uniting the local churches and ultimately make disciples of Christ in beautiful Bolivia.

As I arrived on the 8th of June, David and his friend came to pick me up. People say that the first impression is the one that stays. My first impression definitely stayed. I love the hospitality and friendliness that the Bolivians practice as they receive foreigners at their airport. I learned from David on our ride from the airport to the city that hospitality is “ley del Cruceño,” or simply, the law of the Cruceño. Cruceño is how everyone born in Santa Cruz de la Cierra is called.

As we rode our way to the city, I had my share of hospitality as my official welcome came from the local radio station where David’s Christian music band, “Lagartos” translated Lizards, were advertising for their concert to take place on the following day.

It was early in the afternoon when I finally settled in at the hotel. I didn’t want to waste any time in Bolivia, so I packed up a few items and headed out with David to soccer practice for one of the four teams he coaches. This particular team, a group of school boys age 13-16 years old, were training for the school league playoff game to take place two days later. You could tell that this game meant a lot to the boys, and they were ready for it. I had the opportunity to share a few words of encouragement, but most importantly I saw David’s passion for the game and for the boys he was coaching. I could sense his desire for more out of the boys, more on the field and specially more out of life. He spent a good deal of time talking about preparation for the game and inviting the boys to attend his Christian music concert the next day.

The 9th of June, Paulo arrived from Brazil. On the way back from picking him up at the airport I gave him a brief update on what I had seen the day before and what the day ahead looked like. The main event this day was the “Lagartos Band” concert. It rained the whole night before and the temperature dropped significantly. David expressed his concern about the concert and how important it was for the weather to clear up. By night the skies cleared up but the temperatures were still very low. Paulo and I geared up and headed out to the stadium. Everything was ready and set in motion for a successful night event.

The crowd slowly arrived, very well protected for the cold weather and ready for good Christian music and entertainment. David gave me the privilege to say a few words to his band and pray with them before the concert kick off. I was honored by this opportunity. Despite the cold weather, the concert was a total success! Along with the crowd, I enjoyed it very much. During the concert I could not help but imagine future events. I shared my vision with Paulo,

That night a vision was born. Paulo could see it too. We were excited! In our minds it had already happened. My imagination would soar on the impact this vision would bring to the city. Suddenly, Bolivia seemed like a very fruitful ground for work. To this day I cannot remove these pictures from my mind.

The following day David invited us to attend a soccer match where he was playing. Apparently this was the top, non-professional soccer league in the country. Paulo and I agreed after all, why not make sure that the guy we are meeting to represent ANS Ministries can actually play the game? Without much expectation, honestly, we headed with David to the field. Paulo and I set down to watch the game already being played while David warmed up with his teammates. As the game ensued, we began observing a longhaired, older man who seemed to know very well what he was doing with the ball. Obviously, we did not know his name so I nicknamed him “Batistuta,” after the former Argentinian international soccer player who shares the same taste for the long hair. “Batistuta” made a nice long pass, sprinted 30 yard into space to receive it back to finished it with a nice shot on goal. Almost scores! I joked with Paulo, “Man, ‘Batistuta’ knows what he is doing!” David casually walks by and states, “This is actually Cristaldo, 1994 World Cup starting right-back for Bolivia.” Well, I was surprised! More surprised at how fast that he could sprint at his age than the fact that he was a former World Cup player. As we

joked and enjoyed a good laugh about the whole thing, I turn to Paulo and say, “Well our Batistuta is actually Cristaldo all that we needed now is to see Etchevery play too…” Coincidentally, just about that same time an older man, heavy set, walks right in front of us making his way to the midfield for a substitution. David taps my left knee twice and says, “There he is… Etchevery. You wanted to see him. The Bolivian soccer icon is going to play the last five minutes of the game.” I couldn’t believe it. Paulo and I were just a few hours earlier talking about Etcheverry and how he was such a deadly player whenever he played against Brazil during World Cup qualifiers. It was a remarkable moment. Never could I ever have imagine such a coincidence. Paulo and I were thankful, seeing “El Diablo” Etcheverry and Cristaldo play and later meeting and talking with them brought up some wonderful childhood memories.

The 11th of June, Sunday we were going to follow David and his school team play a playoff game for the school league. The bus came early in the morning. Paulo and I geared up, grabbed some Starbucks coffee near the hotel and headed with the boys for the local university where the games were being played. The match was either life or death; you could sense a little bit of tension from the boys and also from David. I learned something about David that day; he was committed to his passion! The school did not pay for the bus they rented that morning. The school did not provide the team soccer uniforms either. David borrowed the uniforms from a friend and the bus, he paid for most of it himself. Dreams and sacrifice often goes together. Worthwhile dreams require sacrifice! I could see David sacrificing for his dream, and I could see the boys learning that from him. Needless to say, I was happy to see those life lessons being shared from coach to players. I was happy to see a coach and player relationship that transcended soccer and meant more than the end result of a game.

Everyone was excited at the boys well deserved win. They sang on the bus on our ride back from the fields to David’s church where a special program was set up for them. Paulo was going to share his testimony as a soccer player and follower of Christ. We wanted to make the most of this opportunity, and what better than share with a group of excited soccer players? Paulo was right at home. In Brazil, Paulo played for a top name soccer club. He had lived the joys of success and the frustrations of defeat. It was just right that Paulo would share his passion for Christ with such a passionate group of footballers. I helped Paulo by translating his words into Spanish, or at least the closest possible to Spanish. At the conclusion of his message I made an invitation for the young players to place their faith in Jesus Christ and trust him as their personal Lord and savior. The response was slow at first, but it only took one courageous young man to step up in front of his peers to make know his decision to follow Christ and all the other young man followed to do the same.

Was this initial contact in Bolivia a success? I could not determine any different. It was a total success in many ways. First and foremost, Paulo and I made a new friend. David proved to be someone with the character and integrity that we we look for in order to develop a fruitful work and specially a person of initiative and passion for people and God. I am confident that an effective door for ministry has been opened for us in Bolivia.

Join us on this mission to Bolivia. Let's together make the difference in youth lives and win souls for Christ!

We want to sponsor soccer uniforms for David's work with the boys. Will you help us?

CLICK TO GIVE TOWARD SOCCER UNIFORMS TO YOUTH PROGRAM IN BOLIVIA